The editors and staff at Youth Time have made a selection of our favourite fictional teachers from famous movies for you, our readers. Some of them are anything but inspiring role models. While admiring some characters, you should always keep in mind that the fictional teachers are the creations of professional screenwriters. And they don’t always serve educational purposes.

Everybody’s favourite eighties Japanese ninja instructor, the cult star of the Karate Kid franchise attracted audiences and disarmed foes with his trademark Buddha-like tranquillity before unleashing all hell on those who bullied his students, all to the tune of deliciously corny disco music.

A high school chemistry teacher from the TV series Breaking Bad, who metamorphoses into Heisenberg, a methamphetamine producing king pin who brutally consolidates control over the Mexican drug market while masquerading as an innocent family man. A radical vision of turning formal education in a creative direction.

What I came to realize is that fear, that’s the worst of it. That’s the real enemy. So, get up, get out in the real world and you kick that bastard as hard you can right in the teeth.

John Keating is the main character in the movie Dead Poets Society. The original tale of a teacher striving against the regiments of formal education, John Keating revolutionises his classroom only to find himself working against parents, teachers and the system itself.

Boys, you must strive to find your own voice. Because the longer you wait to begin, the less likely you are to find it at all. Thoreau said, “Most men lead lives of quiet desperation.” Don’t be resigned to that. Break out! Break out! Now is the time! 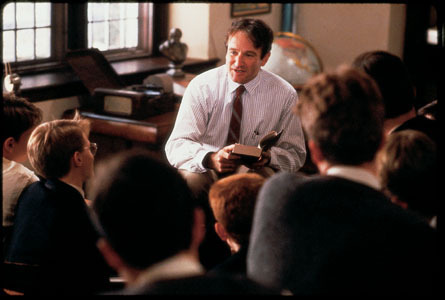 Misguided prophet of the ultimately redundant, or a one man force of revolution against all the odds. Nevertheless, Morpheus, from The Matrix, was not a man to sit still and allow fate to deal the cards.

Sooner or later you’re going to realize, just as I did, that there’s a difference between knowing the path and walking the path. LouAnne was the prototype of the heroine in the movie called Dangerous Minds. She was charged with educating neglected ghetto kids in the hard knock streets of south central Los Angeles during the ‘90s gang epidemic, Ms. Johnson turned the tables on her cynical bosses by employing drug dealing metaphors and army skills to shock the hierarchy and show the potential in even the wildest of classrooms.

I know you kids are angry, because the world isn’t fair. Well, get over it, because it’s never going to be fair.

Does anything need to be said? Master Yoda was the Jedi Order’s fountain of wisdom and upholder of the universe’s moral compass in the sci-fi saga Star Wars. He had little regard for the orthodox.

You must unlearn what you have learned.

A racist, closeted homosexual and transgender, bipolar activist, teacher and self-contained soap opera, Mr. Garrison and his alter ego Mr. Hat brought a new dimension of madness to South Park Village. Perhaps he is the worst possible example of a teacher, but he is an appropriate indicator of modern society.

An assassin by trade, Leon The Professional took an orphan under his wing and educated her in the dark arts of murder whilst cautioning against the endless blood thirst of revenge. We all know how tragic the finale in this movie is.

I never really sleep. Got one eye open, always.