And we start with one of the most famous. Bernadette Soubirous lived in the 19th century and experienced sixteen apparitions of a “young lady”. She prayed for a chapel to be built at the grotto at Massabielle, where she had her first vision. The water from the local spring, from which Bernadette is supposed to have drunk, is considered to have healing properties. Bernadette´s body has never decayed. In late 1980s it was declared that a girl who had been suffering from bone cancer was miraculously healed. Two months after visiting Lourdes, she felt better, and the medical reports proved there was no sign of her previous condition.

Less known in the world at large, but sufficiently well known in the Czech Republic, is the unfinished Gothic Cathedral in Panenský Týnec. We do not know exactly when the church was established, but for a variety of reasons, it was never finished. It is widely believed that the place miraculously heals and calms troubled minds. Due to this belief, the place is perpetually visited by people with health issues or those who just want to recharge their batteries. This is considered to be the Czech version of the more famous French holy place at Lourdes. The origins of the place go back to beginning of 18th century and begin on a morbid note. According to legend, there was a battle between rivals over a beautiful young girl, and one of the opponents was killed. His soul then wandered through the area and frightened passers by. One day, somebody hung out a holy picture to prevent the ghost from appearing. The presence of pictures has increased with the number of stories of prayers that have apparently been heard.  Over time, the stories inspired the idea of a chapel carved in the rock, and the chapel was in fact established and consecrated to the Virgin Mary of Lourdes.  Modlivý důl u Svojkova, like Lourdes, became the location of a miracle when a little girl was healed of leukemia. 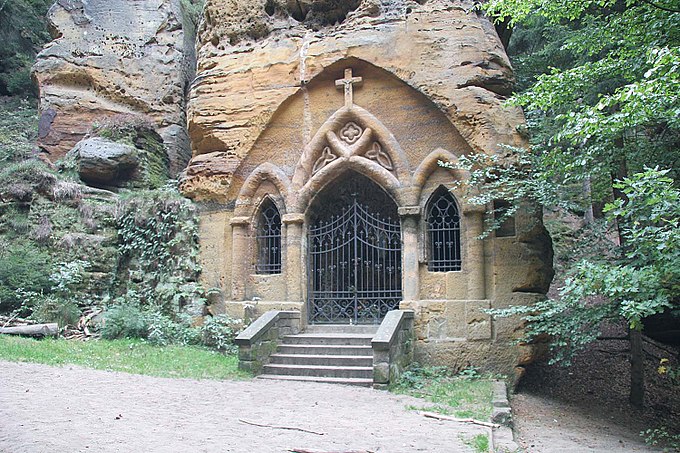 Photo: Prazak. Own work assumed (based on copyright claims)., CC BY 2.5, Odkaz